2019 was a pivotal year for fintech as it became ever more evident that the financial industry is destined to become an amalgamation of finance and technology.

During the past 12 months, many former skeptics and naysayers started hedging their initial bets against crypto. At industry events, RIAs started talking about the risks associated with NOT having exposure to digital assets as the hashtag, #GetOffZero, trended on Twitter.

The financial establishment increased their participation at digital finance events as they bolstered their investments in crypto through the launch of digital asset divisions. Blockchain venture capitalists noted that, during 2019, they began seeing better quality deals, improved governance and an intellectual capital shift to digital assets.

Blockchain technology made significant advancements beyond the financial sector during this past year.

However, in 2019, it was the global regulatory landscape for cryptocurrencies and digital assets that took center stage as the race to launch national digital currencies was ignited.

And even with this impressive list of accomplishments, we’ve barely scratched the surface.

Below are some of the most significant fintech trends that emerged this past year and how they may help shape this next decade.

Regulations Will Continue to Play a Leading Role

In 2019, regulations played a leading role in helping shape the future of finance as lawmakers across the planet began to realize the revolutionary nature and economic potential of blockchain technology. In other words: Governments around the world began catching a big dose of FOMO (Fear of Missing Out).

In a race to keep up with blockchain innovation, legislation was rapidly introduced on state, federal, and international levels. On the international front, China dramatically changed its stance on cryptocurrencies from a nation-wide ban on most cryptocurrency related activities to a declaration of support for blockchain development in China. In fact, China is now on the verge of becoming the first nation to launch a digital currency.

While the U.S. appears to be slower than many other nations to adopt its regulatory framework, it did make significant strides in 2019 – both on a state as well as a federal level.

Presently, the State of Wyoming possesses the most progressive and favorable cryptocurrency regulations in the U.S. It would be wise to keep an eye on Wyoming as it may just end up serving as a petri dish for federal laws.

In the meantime, the most relevant piece of federal legislation introduced in 2019 was the Token Taxonomy Act. If passed, this bill would exclude digital tokens from the definition of a security as well as significantly lower the tax burdens of cryptocurrencies. While there appears to be bipartisan support, it’s difficult to see any meaningful legislation getting passed in the present polarized political climate.

Fortunately, the SEC has been picking up some slack and working to design rules within its current mandate. Accordingly, until legislation is passed that would categorize digital assets and/or exempt digital assets from being classified as securities, the SEC has a few immediate solutions in its arsenal that would significantly impact the growth of digital assets as well as help ensure that blockchain innovation is not being impeded in the U.S.

This past summer, the SEC took bold moves in qualifying token offerings under the Reg A+ exemption. In doing so, it showed that innovative coin or token issuers have a regulatory roadmap for bringing their offering to the general public. Although a promising first step, it’s meaningless without an approved exchange to trade these “securities” in the aftermarket. Look to 2020 for the SEC to address more aftermarket issues including the qualification of at least one token-based Alternative Trading System (ATS).

This past March, the SEC began calling for comments on whether its Custody Rule should be amended to accommodate digital assets. If amended, this could be the biggest game-changer of all. Most people don’t realize that the SEC Custody Rule is the greatest hurdle keeping institutional investors from actively engaging in crypto markets. Because of this pesky rule, auditors have been reluctant to audit cryptocurrency funds. I predict that the Custody Rule will ultimately be amended so that digital assets are treated similar to assets that are settled under delivery-versus-payment (DVP) arrangements. In doing so, the adviser would not be deemed to have custody of such client’s assets; thus, auditors would have greater comfort in auditing cryptocurrency funds. I expect that 2020 will find more auditors auditing cryptocurrency funds which will only fuel institutional demand. I also predict that in 2020 self-custody will begin to emerge as a viable custodial option for digital assets, thus heralding the growth of Decentralized Finance (DeFi).

In another bold move, in December, the SEC finally announced a series of proposed substantive changes to the “accredited investor rule” as they seek to broaden the definition so that it is not limited to financial status. The proposed criteria would be more knowledge-based, thus increasing the eligibility pool and diminishing the pressing need to even classify digital assets and determine whose purview they fall under.

In the case of crypto, this is particularly meaningful given the ongoing uncertainty surrounding whether to treat these financial products as securities offerings or not.

Commissioner Hester Peirce, the SEC’s most vocal advocate of blockchain innovation and digital assets, has even recently questioned whether the accredited investor rule is a good framework to have at all. This was perhaps the most promising statement I heard all year.

In 2014, I began predicting that the “accredited investor” rule would be amended – if not abolished altogether. I am elated that we are finally seeing some progress on this front as it will have epic implications for not only digital assets, but for all alternative asset classes. Broadening and diversifying both the investor landscape as well as the financial product universe would be the most productive risk-mitigating strategy since the advent of the Modern Portfolio Theory in 1952.

It is not only investors who stand to benefit from diversification, for diversification is as essential to issuers as it is to investors. There is much less uncertainty for an issuer in having 100,000 different $10 investors than there is in possessing one $1,000,000 shareholder. Essentially, the smaller the shareholder base, the more thinly traded the security. Every trader knows that one sell order for a thinly-traded small cap from a sizeable institutional holder could collapse a company’s market capitalization in seconds while the impact from Jane Doe dumping her 100 shares to fund her root canal is inconsequential. Simply put: The larger and more diversified the investor base, the more stable the market.

Looking to the future, this concept of investor-based diversification could play an integral role to the success of the digital asset marketplace where even the tiniest of micro-transactions flourish. And, with the ability of tokenization to make even the most illiquid real-world assets accessible to anyone, the impact of diversification grows exponentially.

In 2019, the stock market delivered some of its best returns in years. NASDAQ ended 2019 up 35% as money flowed into technology and made Apple and Microsoft trillion-dollar companies. Presently, there are many unicorns preparing to take advantage of this hot market by making their public debuts in 2020.

In fact, based on the latest financing rounds of 2020 IPO hopefuls, more than $200 billion in venture capital can potentially be unlocked in the coming year. 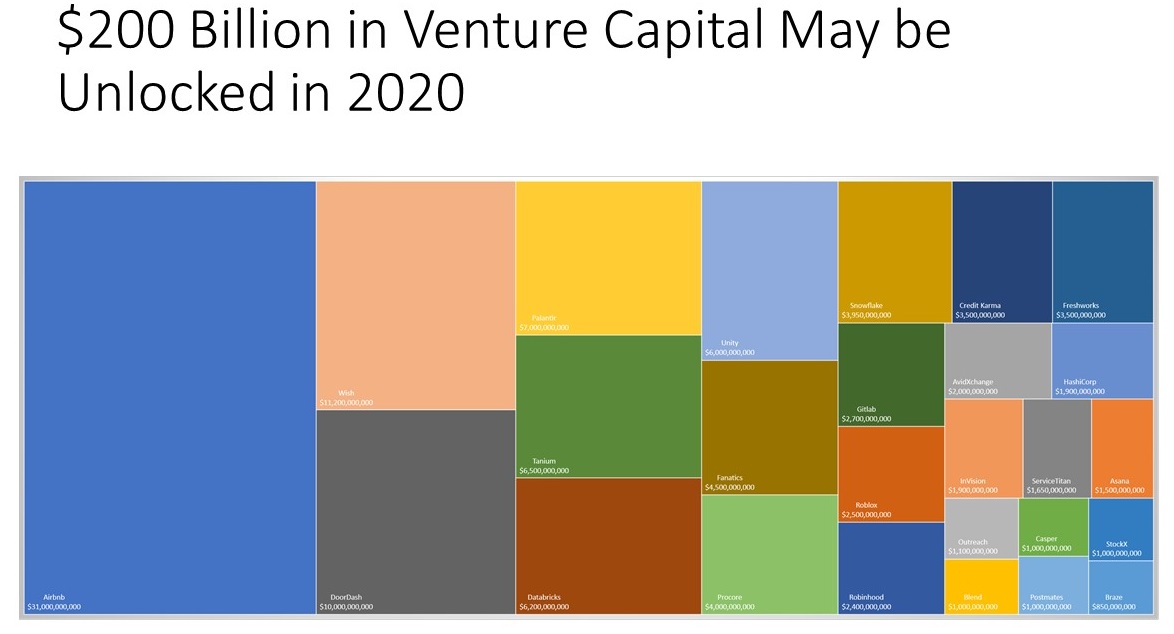 With venture capitalists already seeing better quality blockchain deals, improved governance and a migration of talent going to crypto startups, expect a portion of that capital to flow into blockchain innovation.

During the past year, blockchain technology expanded beyond financial services; it is currently being employed by multi-national corporations to deliver safer products to consumers, mitigate food fraud and make the health care industry more efficient. I expect this trend to continue well into this next decade. Much like internet technology gave businesses IT departments in the 1990s, I anticipate blockchain technology becoming the future “intranet” and being an integral part in every business’ tech stack.

The Roaring Twenties are Back

With markets on a winning streak, modern asset classes improving finance and fueling innovation, and blockchain technology set to revolutionize commerce, there is so much to feel optimistic about.

In fact, I believe that we are on the verge of experiencing the roaring twenties of the digital era.

You may as well start enjoying your “giggle water” because the modern roaring twenties could be the “bees knees” – replete with lots of opportunities to make some digital “clams.”

I already have my flapper dress ready.

This article was originally published on January 22, 2020 in EisnerAmper’s Knowledge Center