With Facebook nearing an $85 billion valuation in secondary markets and Groupon rumored to go public at a $25 billion valuation, many economists, particularly those whose kitchens are wallpapered in Webvan stock certificates, are already rushing into bubble banter. After much investigation and a brief history refresher, I have reunited with my old college friend, Jill, a skilled “bubble blower” and “measurer extraordinaire”, to invent the Bubble-ometer. The Bubble-ometer, with its pinpoint accuracy, is designed to gauge the formation, growth and burst of stock market bubbles.

Following today’s depressed Bubble-ometer reading, I have decided to step up and quell this recent tech bubble gibberish. While most people believe that bubbles are made up of soaring valuations and hot air, history has demonstrated that the following ingredients are essential to inflate market bubbles: irrational optimism, contagion, hyper-speculation, over-leveraging, burgeoning IPO market and increased participation of small retail investors. I would contend that none of these elements exist in the secondary marketplace where today’s fastest growing Internet companies are being traded at eye-popping valuations.

Raise your hand if you have seen the public contagion and mad rush of small investors to buy stock in emerging private companies. I see not one hand lifted. That is because Joe Retail Investor is either waiting on the sidelines for the IPO market to re-emerge or he’s too busy standing on the unemployment line. Even the majority of sophisticated investors are in the dark when it comes to private company investing. According to Wall Street’s First Social Media Analyst, Lou Kerner, because so few would-be buyers of private company stock are even aware that this marketplace exists, there is a gross imbalance between supply and demand, favoring demand. I would agree that this disparity establishes a stronger case for an undervalued secondary marketplace.

I grasp that a stock market bubble occurs when market participants drive stock prices above their value in relation to “some system of stock valuation”, but in what methodology does the mere presence of a “high” number denote overvaluation? Every bigger-boned person stepping on a scale knows that just because a number is “large” not does not mean it is oversized. Besides, shouldn’t higher price/sales ratios be warranted for companies with revenues accelerating at never-before-seen speeds? It took Microsoft fifteen years to reach $1 billion in sales. Groupon did it in less than three. In a world where a company’s customer reach is limitless, its sales cycle is exponentially shortened and its marketing costs are significantly diminished, perhaps trading at 25 times revenue is the new black.

We live in transformational times where communications is evolving at warp speeds. To put it into perspective, it took man a little over 4 million years to develop the written language. Thousands and thousands of years later, it took radio 38 years, television 13 years and the Internet just 4 years to reach 50 million users. Today, in a matter of just 1 second, 7 PCs are sold, 9 new people logon to the WWW for the first time, 25 cell phones are sold, 257 search queries occur, 1,157 videos are viewed on YouTube and 2 million emails are sent. Social networking has enabled hundreds of millions of consumers, businesses and acquaintances, across the globe, to communicate with each other instantaneously. It has forever altered the way we form friendships and business relationships, receive our news, interpret the world, market ourselves and our products, discover new brands and shop for goods and services. I have maintained that throughout the course of history, innovation in mass media has been the impetus for stock market growth. I believe that with communications snowballing and social shopping revolutionizing consumer behaviors, we are about to embark on a new era of consumption and expansion unlike any we have seen before. 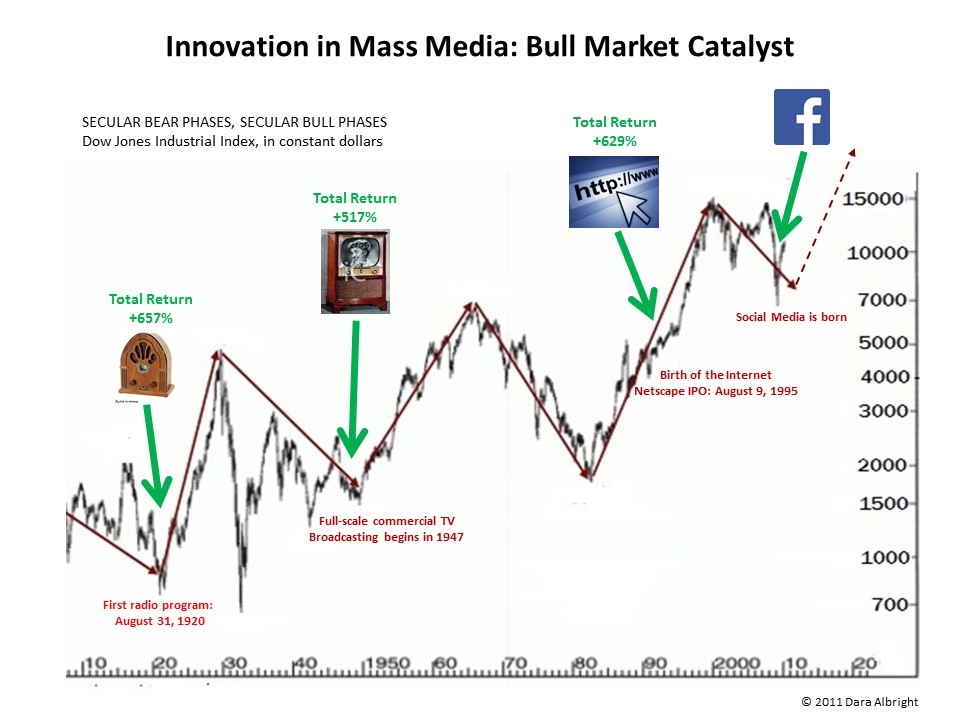 As the chart above depicts, greatest bull markets in history have all coincided with the invention of a new medium with which to reach the consumer. The 1920’s witnessed a boom in consumerism as a result of the creation of the radio, the first mass broadcasting medium. By 1930, 13.8 million people owned radios up from zero in 1920. During this era, spending lots of dough was the bee’s knees so that dames and daddies alike could get all dolled-up in their glad rags and drink some giggle water. {Tangent alert: I hope the slang “giggle water” one day makes a comeback. It’s so catchy.} Installment buying swelled to record levels as products such as cars, homes and new appliances were purchased on credit. In fact, 60% of cars, 70% of furniture and 80% of household appliances, including radios, were bought on installment credit. Between 1925 and 1929 the total amount of outstanding installment credit more than doubled from $1.38 billion to approximately $3 billion. The thriving stock market grew over 400% as millions of retail investors raced to invest in companies, that sold products no one fully paid for, on 10% margin. When the credit bubble burst, the economy plunged into a deep depression. It would take the next innovation in mass media to fully restore it.

Many would credit postwar optimism with the onset of the longest bull market in history which ran from 1947 to 1957. I would argue that the catalyst was commercial television which began broadcasting to the public in 1947. The exponential growth curve of the television was steeper than that of any other technological invention of the century including telephone, radio and automobile until Al Gore’s Internet (according to Al Gore). There is no doubt that the Internet rescued the economy from a recession in the early 1990s and ignited the growth of the dot com heavy NASDAQ. However, it was the imaginary dollars generated from illusive barter and lazy susan deals booked as real revenue that pumped up the bubble. And just like in the 1920s, once again retail investors sprinted to buy stock, on margin, in companies selling products that no one paid actual cash for.

With bubble-mongers intent on likening today’s enthusiasm for Internet stocks to yesterday’s irrational exuberance that led to the dot com crash, I feel the need to dispel any similarities. Unlike the first dot-com era, where companies with neither customers nor a clear business plan raised millions in public stock offerings, today’s Internet company has a minimal cost of entry and a considerably larger target market, is staying private longer, executing on its business model and building revenue. Today’s Internet company is so extraordinary that it has even found a way to generate tangible currency from the sale of intangible products resulting in mind-blowing profit margins.

Not only are today’s Internet companies in a class all to themselves, but they trade in a marketplace so far removed from Wall Street that we are in complete unchartered territory. For the first time in history we are witnessing a dynamic combination of technology advancing communications at lightening speeds, companies generating actual revenue at unprecedented rates and an untarnished long-only marketplace that does not facilitate shorting, margin, derivatives and small retail investors. I simply cannot comprehend how some of our most brilliant financial minds can view today’s activity as even remotely frothy. As opposed to fretting over a hypothetical tech bubble, my concern is channeled toward the undisputable inflating deficit. Fortunately, another media revolution is brewing. One that is more powerful than the radio, television and the first Internet combined. And it will once again save us.

Let’s discuss it in person over some “giggle water” at future events!