In simpler times, American workers relied on pensions to secure their retirement. Those who desired a supplement to their pension income opted to save during their pre-retirement years. Like television stations, investment options were primarily limited to three main providers. Instead of being bogged down with choices, savers essentially had their pick of placing money in interest bearing savings accounts, stocks or bonds. With the exception of occasionally having to get up from the sofa to change the television channel, life was pretty uncomplicated.

Then the 70s arrived – bringing a rash of polyester and laying the groundwork for sweeping changes throughout the financial system.

Ever since, our capital markets have been in a perpetual state of transformation fueled by innovations in brokerage services, advisory tools, investment products, retirement plans, financial technology and shifts in both the political as well as economic climate. The confluence of these evolutions – as depicted in the infographic below – continues to not only redefine retail investing, but America’s entire retirement framework. 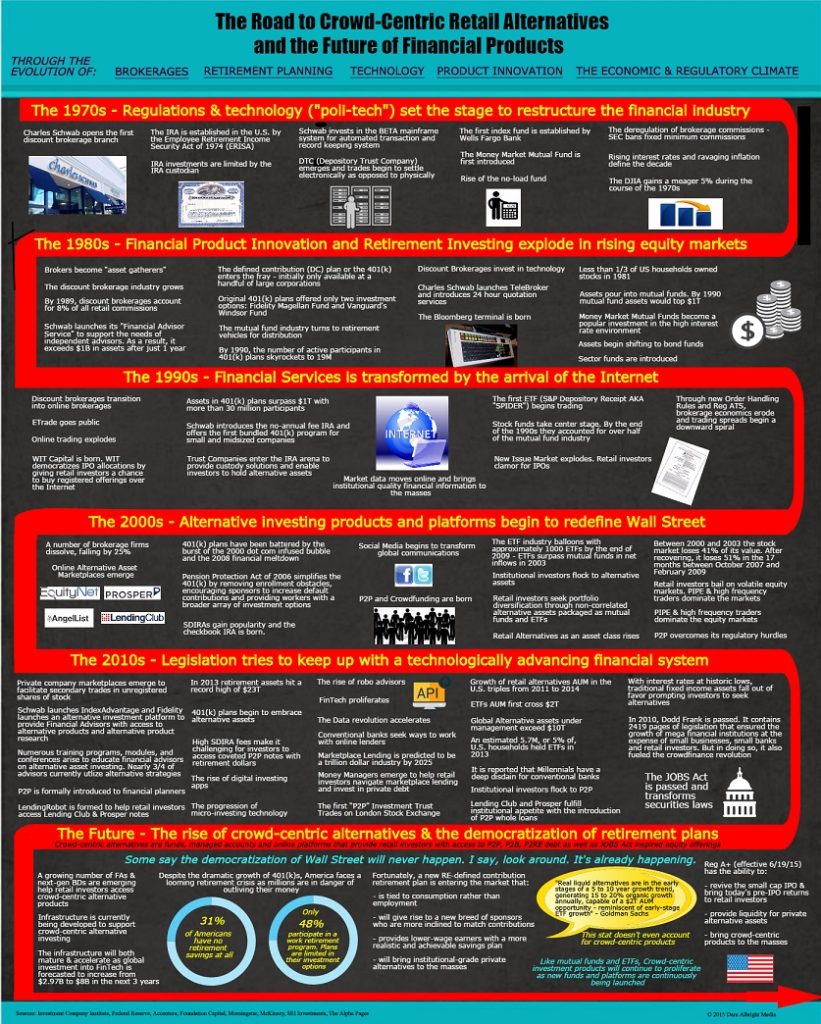 During the past four and a half decades the brokerage business has moved online, slashed commissions and turned its commission-based securities salespeople into asset gatherers. As the number of brokerage firms steadily declined, online alternative asset marketplaces began to rise.

Tools were developed that would enable financial advisors to navigate across a growing number of asset classes and help ensure the proper diversification of retail portfolios. These advisory resources also contributed to the proliferation of new asset classes and retirement accounts.

Legislative changes coupled with technological achievement led to the democratization of both financial products as well as market data. This “poli-tech” dynamic not only furthered the growth of conventional asset classes, it inspired a host of innovative online investing platforms, lending models, equity financing structures and the creation of new asset classes.

Over the years a groundswell of investment products have been engineered for the mass market resulting in the flow of retail dollars across money markets, mutual funds and ETFs. Particularly during the recent years, as interest rates reached historic lows and equity markets became excessively volatile, there has been an upsurge of interest in uncorrelated alternative assets.

To meet the mounting demand, a wave of retail alternative products entered the market. According to McKinsey, retail alternatives will soon account for almost 50% of total retail revenues. Furthermore, Goldman Sachs believes that retail alternatives are in the early stages of a 5-10 year growth trend – reminiscent of early-stage ETF growth and capable of becoming a $2T AUM opportunity.

As financial advisors were becoming acquainted with a growing number of retail alternative products packaged through mutual funds and ETFs, a new niche of alternatives known as crowd-centric alternatives had been gaining popularity – particularly among institutional and internet savvy retail investors.

These crowd-centric alternatives – designed to bring non-correlated yield and pre-IPO equity growth to mainstream investors’ portfolios – are made up of public as well as private funds, managed accounts and online platforms that provide investors with access to peer-to-peer, peer-to-business and peer-to-real estate debt as well as JOBS Act inspired equity offerings.

While momentum continues to build for crowd-centric alternatives, an interesting phenomenon has been brewing in the retirement plan industry. Flaws in the current IRA and 401(k) structures as well as the social security system have legislators as well as economists scrambling to prevent a looming retirement crisis. Thus far, none of the publicly proposed solutions even begin to scratch the surface of the predicament. That is until now.

Fascinatingly, the RE-defined contribution plan and crowd-centric alternative assets have the potential to power one another’s expansion in much the same way that the IRA, 401(k) and mutual fund industry fueled each other’s massive growth in prior decades.

Although I cannot promise that polyester and orange shag carpets won’t make a comeback, I can absolutely guarantee that financial services will continue to evolve through the progression of new ideas, products, tools and technology.

This article was originally published by The Alpha Pages on June 2, 2015