Ever since I was a child I have been fascinated by broadcast media. The fact that cavemen were eventually able to invent a box that would bring faraway images and sounds into our living rooms was nothing short of extraordinary. Almost as miraculous as life itself.

But it wasn’t until my college years did I really start paying attention to the implications of these media inventions.

As a sophomore at George Washington University, I studied the “History of Mass Communications” under Professor Christopher Sterling, a highly regarded media historian. Sterling’s class – which underscored the evolution of radio and television – completely changed the way I thought about innovation. I stopped looking at radio and television as mere inventions and began seeing them as instruments which were revolutionizing mankind. 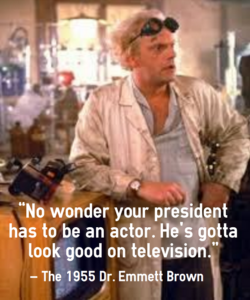 It’s been nearly 28 years, yet I remember – like it was yesterday – writing my term paper (still referred to as the paper that should have received an “A”) on how the television transformed the political landscape by deciding the 1960 presidential election. Those who had listened to the Nixon/Kennedy debates on the radio felt that Nixon had won. On the other hand, those who watched it on television saw the more polished Kennedy as the clear winner.

Throughout my entire Wall Street career – as mass media was evolving and global Internet users were proliferating – I was regularly drawing inspiration from Sterling’s lectures. Realizing how the television helped reshape the political landscape in the 1960s, I would often ponder the global imprint of the Internet. Ever since the mid-1990s, I found myself constantly envisioning ways in which this new digital medium would transform not only politics, but commerce, social behaviors and, of course, finance.

I marveled at how the Internet began changing the way we shopped, the way we mated, and especially, the way we invested. In the 1990s, I began purchasing products and trading stocks online. I ultimately met my husband online. I eventually reconnected with people I hadn’t seen in decades or thought I’d ever see again in an online social setting. But what I never anticipated was that these ghosts from the past or even my newly formed virtual “friendships” would be able to influence the products I was purchasing, the news I was reading and the investments I was making.

These unprecedented persuasive attributes have made “Social Media” a civilization game-changer.

48 years after the television helped elect President Kennedy, it was an online social network that would help elect President Obama. The young Senator was proficient in utilizing Facebook to amass voters and essentially “crowdfund” campaign contributions. It was the most genius exploitation of mass media in the history of politics – that is until 2015, when a businessman entered the political arena and changed the game once again.

Donald J. Trump was able to leverage new media to revolutionize the economics of campaign finance. He proved that a candidate doesn’t need to outspend his opponents with media buys in order to win a presidential election. While there are those who may disagree with his message or find his methods of communications to be eccentric, no one could diminish his remarkable dexterity in maximizing media. Trump demonstrated that he could influence more voters with one “free” tweet than his political rivals were able to do with hundreds of millions of dollars in television ads.

Now, I realize that Trump’s tweeting is unconventional – even uncomfortable for some. But people need to realize that media is in a state of endless evolutionary flux. Trump is using modern iterations of media to his advantage – much like presidents have done before him and will continue to do long after his administration ends. FDR spoke to the populous through radio in his fireside chats. The handsome Kennedy was able to exploit visual media – the television – to appeal to the masses.  Obama touched folks through Facebook. And Trump, well, Trump tweets.

Not only is tweeting by far the most cost-efficient method currently available to deliver a message to a widespread audience, by tweeting, Trump is consistently strengthening his connection with voters. Through Twitter, Trump empowers voters by making them feel as though they have a direct line of communications to the President of the United States. And the more Trump communicates directly with the people through his tweets, the more impotent traditional media becomes.

Trump has successfully leveraged twitter to advertise his message – for free and without the journalistic spin – while simultaneously giving his constituents a voice. That is the brilliance of Trump’s tweeting.

But, Trump didn’t just tweet his way to the Presidency, he has redefined the future of mass media.

This shift in the way we digest news will have epic implications on mankind. Everything will change – politics, commerce, journalism, the arts, and the financial markets. Not one aspect of our lives will be left untouched. As human beings we will change spiritually. We will think differently, vote differently, opine differently, experience emotions differently, consume differently and, of course, invest differently.

The media establishment is quickly going the way of the phone booth, the horse-drawn carriage and the cassette tape. Even the eminent NY Times is struggling to stay afloat – as evidenced by it seeking supplemental revenue sources and in attempting to rebrand its image. With its print business languishing, the media giant has added the role of “landlord” to its repertoire. As if divesting part of its interest in its New York City headquarters wasn’t enough, the NY Times has recently decided to sublet at least 8 floors in order to generate some rental income.

Perhaps the NY Times is looking to its new tenants to finance its first major brand campaign in decades. Its new “The Truth is Hard” television commercial seems to be aimed at defending the journalistic integrity of mainstream media while discrediting online voices that have been gaining influence at their expense.

I have a “newsflash” for the NY Times. The truth is easy. It’s regaining lost trust that’s hard. Trust is earned with deeds – not bought through modern madmen on Madison Avenue. These “truth” ads will prove to be as fruitless as the crusade to destroy “fake news”. And, using the antediluvian television as the advertising medium of choice is as ironic as the ads themselves. It merely substantiates just how out of touch the establishment truly is.

While everyone is so hung up on “Fake news”, I can’t help but wonder whatever happened to the “real news”. It feels like all news these days is nothing but events wrapped in opinion. And opinions, like access to capital, are becoming more democratized by the minute.

Thanks to the proliferation of social media, each and every one of us is now a broadcast journalist and a pundit. We are constantly feasting on the very same content that we are creating. Likewise, social media has enabled each one of us to concurrently play the role of the consumer, the producer, the advertiser, the financier, the borrower and the lender. We are both crowd-investors and the crowd-police force.

“We the people” are the ones who get to decide what we watch, what we read, what we broadcast, what we believe, and yes, how we invest our capital. Not the government. Not the networks. Not Wall Street.

Like it or not, alternative news is here to stay – as is alternative finance. Both are on an unstoppable path to demolish mainstream media and devour the financial establishment.

For generations, dynasty wealth has been built by being on the forefront of media and financial innovation. Today’s digital media and FinTech revolutions offer unprecedented economic opportunity. 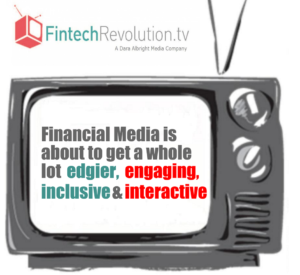 Mark my words. If a private sector businessman, without any prior legislative experience, can harness the power of digital media to take the highest public office in the land, wait until you see what emerging businesses and micro-investors will be able to accomplish beyond Wall Street and without the mainstream media.

PS – if Professor Sterling should happen upon this article, please consider changing my grade to an A+. It might help me with my law school applications.