On Friday, August 18, 2017, Chicken Soup for the Soul Entertainment, Inc. (CSSE) made IPO history by becoming the world’s largest Reg A+ IPO, raising $30M at a pre-money valuation of $120M, and the first Reg A+ to trade on the Nasdaq Global Market, Nasdaq’s top tier market.

The stock opened up strong, rising as much as 10.5% above its $12 IPO price to $13.26. However, as the day went on, the stock price began to wane – not because of fundamentals but on account of “misinformation” (some may even say, “fake news”), abusive shorting and algorithmic trading.

Let’s start by addressing the erroneous news articles that incited the bears in the first place. About an hour and a half into trading, one well-respected financial media outlet published an article from a writer in Bangalore, India. The article, which originated on the other side of the planet, was shamefully ridden with so many inaccuracies that it required multiple corrections throughout the evening – leaving disinformation available for all to read throughout trading hours. While supposedly “corrected” by the news source, this misinformation will live eternally – in infamy – on the Internet. In effect, this rotten egg cannot be unscrambled.

Not only was the writer incapable of getting the symbol correct, Chicken Soup for the Soul Entertainment’s entire business model as well as its use of proceeds were utterly misreported.

Despite what was reported from Bangalore, a book publisher did not go public on August 18th. Instead, what IPO’d was a disruptive media company capitalizing on the megatrends that are affecting today’s entertainment industry, including the audience fragmentation, advances in technology, and increased “cord-cutting”. (Think Netflix of inspirational programming).

Likening CSSE to a book publishing company is even worse than having had equated Microsoft (MSFT) to a mainframe computer company when it made its public debut back in 1986.

For those who need a memory refresher, Amazon (AMZN) wasn’t just some book seller either when it went public, 20 years ago, with just $15.75M in revenue and losses of $5.78M. At $460 billion, today, Amazon is worth almost twice as much as Walmart, the world’s largest “bricks, mortar and online”, or “BMO”, retailer.

The Bangalore article also grossly misrepresented the company’s use of proceeds, making it appear as though CSS Entertainment is using the entire $30M solely to repay debt. This could not be further from the truth. This is like fake news on steroids. The fact is, according to the company’s offering circular, CSS Entertainment plans to use the bulk of the proceeds to continue its expansion through programming and strategic acquisitions.

In the days just following the close of the offering, CSS Entertainment announced that it already begun production on three series which will air on major broadcast and cable networks as well as be distributed through CSS Entertainment’s online distribution channels, including through Ashton Kutcher’s Aplus.com.

Based on its post-IPO production schedule, CSS Entertainment also disclosed that it is now targeting 2017 revenue of $20 million and EBITDA of $10 million. To be clear, these results are for this year. This means the year ending December 2017 – a mere 4 months away. And, the company is projecting 2018 revenue of $36 million and EBITDA of $18 million. At a multiple of 10 to 15 times EBITDA, one could readily justify shares of CSSE trading in the $14 to $16 range.

According to a few of CSSE’s institutional investors, the stock is currently worth $15. One of such investors stated that he expects the shares to be worth “$23 to $25 within a year with upside optionality from the continued implementation of the company’s OTT network as well as additional items such as the increasing value of its content library. And this is without taking into account any strategic acquisitions.”

And just imagine where the stock could be trading once the market manipulators and abusive shorters move on to victimizing their next small cap company.

I’ve written before about the economic perils of high frequency trading (see: Today’s America – Nothing Ventured, Everything Gained – at Least for Some). Yet, sadly, here we are once again witnessing this destructive casino capitalism mentality in action.

Worse than the inaccurate reporting and even more abhorrent than the market manipulation is what appears to be an all-out assault on Reg A+, crowdfinance and small cap IPOs in general.

The Bangalore article intimates that because of their size, small companies aren’t worthy of being public. The piece even quotes an academic source as stating that “it is unusual for such a small company to go public in the United States.”

Based on all of the other blunders, one would only hope that this quote was taken out of context. It is hardly “unusual” for small companies to go public in the U.S.

Publicly traded small caps have served as the backbone of the U.S. economy and the heart of global innovation for decades. In fact, it was America’s small cap IPO that enabled Nasdaq to become the greatest wealth producing engine that the world had ever seen.

The chart below should serve as a constant reminder of the power, potential and significance of the small cap IPO. 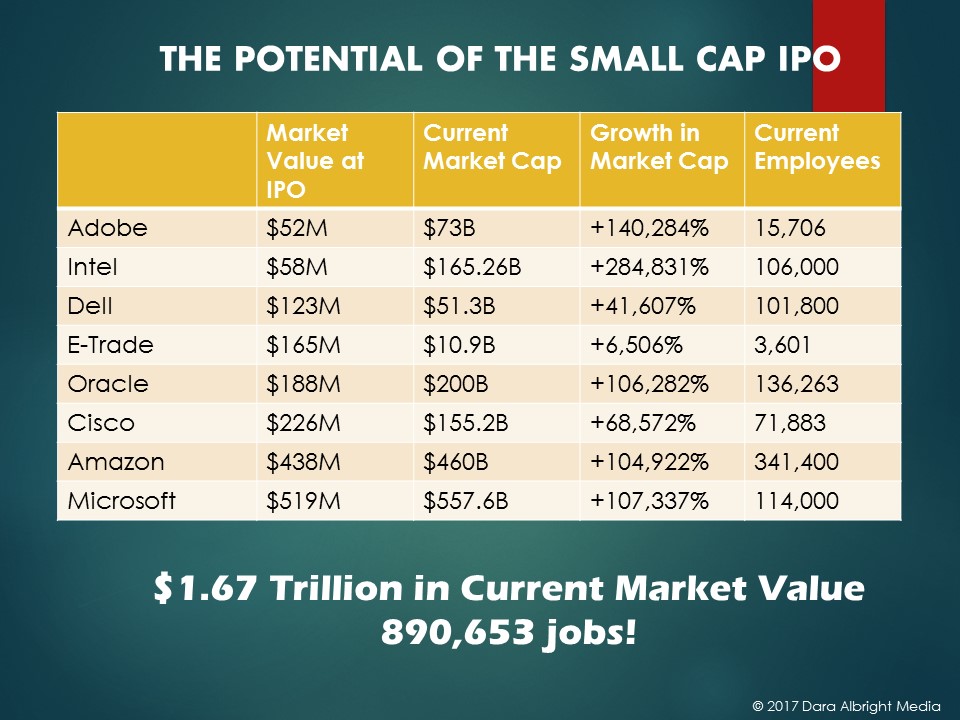 I would agree that today’s public markets strongly disfavor small caps. But, that doesn’t mean we should simply accept it as the norm. We need to change this mindset. We need to stop looking at small caps as the underbelly of the markets and start viewing them once again as wealth and job creators. We need to repair the landscape so that small cap IPOs are given the same opportunities as large caps to thrive on public exchanges.

To the detriment of an entire planet, America’s small cap IPO market has been perishing since the late 1990s (see: Dave Weild’s white paper: Market Structure is Causing the IPO Crisis…and More).

Reg A+ could be our one chance to revive the small cap IPO market and reawaken economic growth before it disappears without a trace. Let’s not screw it up with fake news!

This Article was originally published on Crowdfund Insider on August 30, 2017