While I can’t recall the exact date, I can remember the very spot where I was standing when, in early 2015, I received a call from my good friend and crowdfund pioneer, Sally Outlaw. I assumed that she was calling to discuss the latest State to promulgate crowdfunding legislation or perhaps to bounce off a few ideas for her next article for Entrepreneur Magazine.

I could not have been more wrong.

Sally was calling to brainstorm a novel FinTech idea she was working on that would enable even financially struggling Americans to save for retirement and capitalize on emerging trends in peer investing.

To say I was intrigued would be an understatement. I was blown away.

As Sally shared her vision for a company called Worthy, I tried to temper my enthusiasm. I truly did. But it was really hard not to get excited as I envisioned the big picture implications of her concept. Because of its ability to re-inspirit small investors as well as provide a sustainable retirement solution for the financially underserved, I felt that Worthy held the potential to democratize America’s institutionally monopolized financial system as well as its flagging retirement infrastructure. In fact, if executed correctly, the Worthy solution could even reverse America’s harrowing wealth gap.

Sally’s mission was a lofty one. Nevertheless, she set out to develop a digital solution that would bridge those frequently overlooked by financial services providers with the types of investment returns traditionally only available to wealthier investors.

Through bootstrapping, Sally assembled a topnotch development team to build the product. By late 2016 a select group of individuals were offered the opportunity to “test drive” Worthy’s new digital app.

I became one of those early “beta testers”.

I opened a Worthy account, linked my bank account, and began spending my way to retirement. Each time I used my bank-linked debit card, Worthy automatically rounded up my purchase to the next whole dollar. Those “round-ups” were then invested in peer notes generating a fixed 5% interest. Within a few short months I had a few hundred dollars socked away in my Worthy savings account, earning 5% per year.

I was content. I felt good about my return – and even better knowing that my money was helping America’s small businesses. Most importantly, I never once felt “pressured” to invest.

Unlike traditional investment advisors, Worthy never pitched me to buy an investment product. It never asked me to cut a check or initiate a wire transfer. It never demanded that I fill out mountains of paperwork. Instead, all Worthy did was help me accumulate money as I shopped and then inform me of how much I had been amassing.

It was easy. It was fun. It was lucrative. As such, I would be receptive to learning about any investment product that Worthy might someday suggest – whether it be P2P consumer debt, an online real estate opportunity or even small cap equity offerings.

Quite frankly, Worthy changed my entire perspective of retail investing.

The pilot program proved to be a great success – not only for users like me but also for online finance platforms – many of which find themselves in an endless uphill battle to engage retail investors. In fact, according to Outlaw, the beta test demonstrated that Worthy users purchase peer-structured notes at twice the rate of investors originating from other sources. 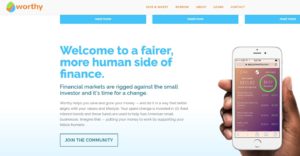 The success of the pilot program led to the completion of a financing round which the company announced on July 17, 2017. But the round-up program is just one small piece of the Worthy solution. Some of the most intriguing aspects of Outlaw’s vision have yet to be publicized. Now that the company has a few shekels in the bank, expect many of the “bells and whistles”, along with new partnerships and retail products, to be announced in the near future.

Perhaps one day, in the not too distant future, you’ll remember exactly where you were standing when you read this article and first learned of a little company called, Worthy.